THUNDER BAY, ON — This past Wednesday, the Thunder Bay Queens celebrated their annual year end banquet at the Victoria Inn with 296 people in attendance.

The Queens would like to especially celebrate the 14 players graduating from Midget this year.

Mackenzie is a 7 time Queens player.  Mackenzie will be pursuing a degree in Education at Lakehead University and trying out for the LU team.

Lucy is a 3 year Midget AA player.  Lucy has accepted a Scholarship to Mount Allison University to play hockey and study Chemistry.

Jocelyn is a 7 time Queens, Jocelyn will attending Confederation College to study Dental Hygiene and play for the college team.

Hannah received multiple hockey and academic offers and has decided to pursue a degree in Applied Human Nutrition at the University of Guelph and has received an entrance exam there based on her GPA which is well over the 90 percentile.

Riley is debating between multiple program choices to further her education at Lakehead University next year.

Molly is a 3 time MAA player.  Molly has accepted a hockey Scholarship to University of Manitoba.  She will be pursuing a degree in Kinesiology.

Caitlin declined multiple hockey scholarships, instead accepting a 4 year academic scholarship from Lakehead University where she will pursue a degree in Education. Caitlin also attended a ceremony in Winnipeg where she accepted 1 of the 2 Travis Price Spirit Award Scholarships that are given to a minor hockey player in Canada.

Every season since 2013, Jessie Scott has re-located to Thunder Bay from Terrace Bay to play for the Queens.  She will be Attending the  University of Ottawa, studying in French with a double major in Criminology & Education and will try out for the University hockey team.

Victoria is a 7 time Queens player.  Victoria was the MAA captain this year.  Victoria will be attending Lakehead University and taking concurrent Education and will try out for LU team.

Sydnie declined a hockey offer from the University of Michigan and will be staying in Thunder Bay to study Nursing at Lakehead University.

Jamie committed to the Queens Program back in 2016.  Jamie moved each season to Thunder Bay to pursue her passion for hockey and play for the Queens.  She has accepted a hockey Scholarship to University of Manitoba.

Mya has declined an offer from the University of Michigan.  She will be pursuing a Biology Major at either the university of Guelph or Lakehead.

Josee will be attending Algonquin College of Applied Arts and Technology in Ottawa and studying in the Child and Youth Care field. 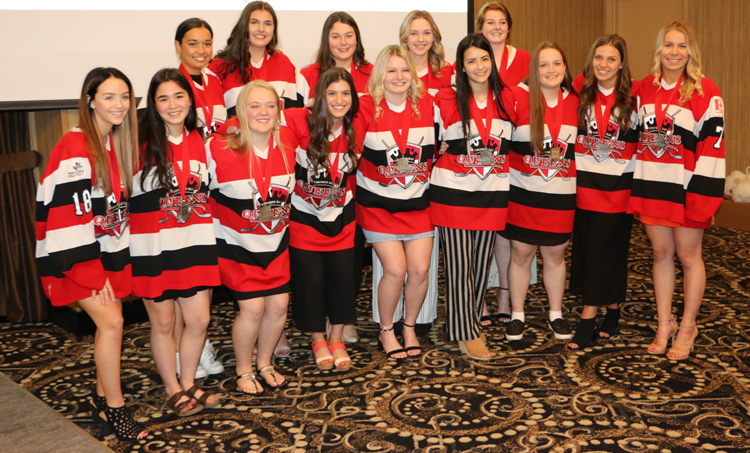