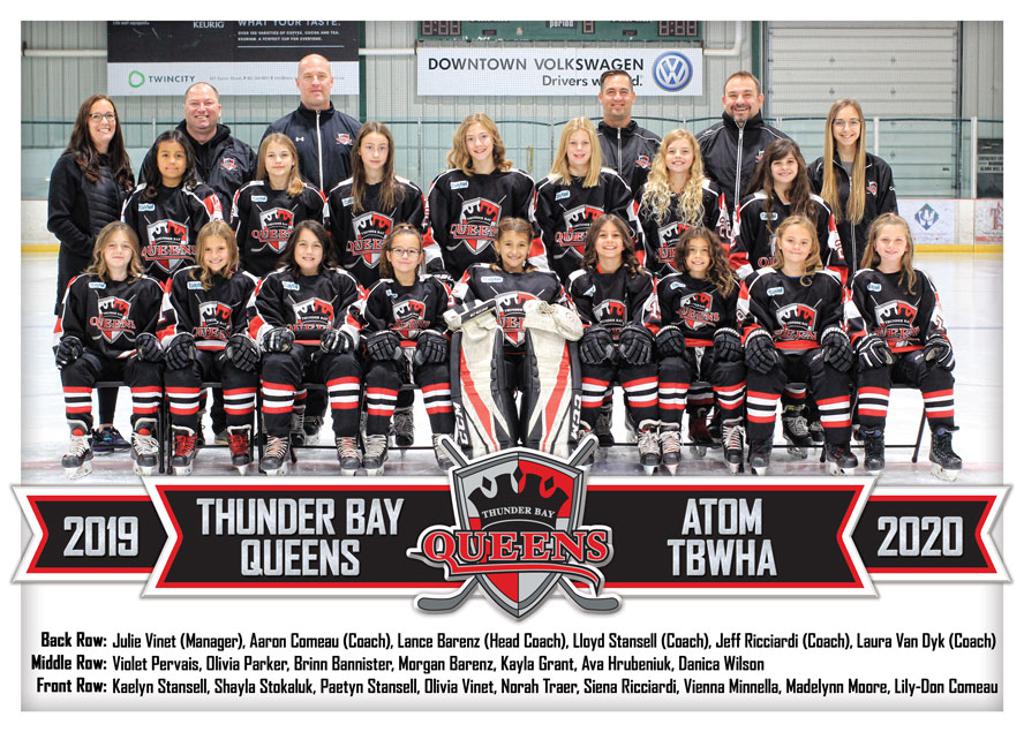 BLOOMINGTON, MN — The Gridlink Atom Queens leave the Cupid Classic with a perfect 4-0 record. After shutting out three straight opponents, the Queens were matched up against 2-0-1 Blaine Spring Lake Park. Blaine became the first team to score on the Queens in the tournament scoring the only goal in the first period. In the second, Thunder Bay rallied with a trio of goals. Ava Hrubeniuk would setup teammate Olivia Vinet to tie the game before Ava scored twice (assists credited to Paetyn Stansell and Kayla Grant. Paetyn would put up another marker in the goals column in the third after being setup by Kaelyn Stansell and Olivia Vinet. Blaine managed to get one back but it was quickly cancelled out by another Paetyn Stansell goal as the Queens defeated Blaine 5-2, improving their record to 4-0, out scoring opponents 20-2!

BLOOMINGTON, MN — Both the Gridlink Atom Queens and Strasser & Lang Peewee Queens are competing in the Cupid Classic in Bloomington, Minnesota this weekend.

The Atoms got started a day earlier than the Peewees, with two games in the U10-A Division. They took on Hopkins Park Thursday afternoon and really took it to them. In the first period, Ava Hrubeniuk setup up teammate Morgan Barenz (secondary assist to Kaelyn Stansell) to open the scoring before Hrubeniuk potted one of her own. 2-0 after one.

In the second, Olivia Vinet scored two goals in 14 seconds (with assists being credited to Madelynn Moore and Shayla Stokaluk). Hrubeniuk would setup linemate Barenz again and Siena Ricciardi and Vienna Minnella’s board work would get the puck to Lily-Don Comeau who’d snipe, putting the Queens up 6-0 after two.

Vinet completed the hattrick early in the third after being put in a good spot with the puck by Stokaluk and Paetyn Stansell. Keeping with the previous two periods, Hrubeniuk and Kaelyn Stansell helped Barenz to also complete her hattrick bid. And to cap it off, Hrubeniuk notched her 4th assist (and 5th point) assisting on Danica Wilson’s goal. Morgan Barenz ends the night with 4 points (3 goals) in the 9-0 trounce. Norah Traer, given more than enough run support, got the shutout.

From there, the Atoms had a quick turnaround, facing Forest Lake that same evening. The Queens struck both first and twice, as Siena Ricciardi potted the opening goal on a play from Brinn Bannister and Danica Wilson buried one thanks in part to the hard work of Kayla Grant and Olivia Vinet who drew assists. The goals well dried up in the second but goalie Norah Traer maintained the 2-goal lead. In the third, the goals started up again with Morgan Barenz scoring her 4th of the day on a feed from Kaelyn Stansell and Vinet also notched her 4th of the day to complete the 4-0 win. Norah Traer, still perfect with another shutout.

With a perfect 2-0 record, the Gridlink Atom Queens met up with the Rosemount Irish Friday morning. The Queens needed to kill off a couple penalties in the first to take the opening frame to a 0-0 draw. In the second, Lily-Don Comeau finally broke the double goose-egg on a couple plays setup by Sienna Ricciardi and Vienna Minnella, the only goal of the period. In the third, the Queens managed 9 shots on the Irish but couldn’t get that insurance marker. Luckily for them, Norah Traer wouldn’t need any more margin for error as she earned her third straight shutout of the Cupid Classic, shutting out Rosemount 1-0.

The Gridlink Atom Queens play Sunday at 11:45am against an opponent to be determined.

Meanwhile the Strasser & Lang Peewee Queens played one game on Friday against the Lakeville Icecats. Lakeville opened the scoring but the Brynn Hannula responded with a powerplay goal followed by Kingston Golding putting home a setup pass from Edelweiss Price to put the Queens up 2-1. Lakeville tied it up again, to which the Queens again had a response as Beth Gagnon scored from Hannula to give Thunder Bay a 3-2 lead after one.

The Icecats would then go on a run of sorts scoring 5 unanswered goals in the next two periods. Hannula got one back but it’d be far too little as the dropped their opening match 7-4.

Saturday, the Peewees take on Blaine Spring Lake Park at 10:30am and then meet Rosemount at 4:00pm. Sunday’s schedule is TBD.